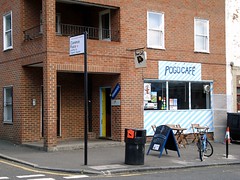 Pogo was a cooperative-run vegan cafe in Hackney. It opened in Summer 2004 and closed at the end of August 2013.

As of October 2013, the premises are occupied by Black Cat Cafe, which is also vegan and cooperatively-run.

Vegan cafe in Hackney, located on the corner of Clarence Road and Clarence Place. It opened in Summer 2004. It's run as a co-operative, and the staff are all volunteers.

As of April 2011, the cafe also hosts a small bookshop (the previous free book exchange is no more).

Note: Pogo had a sort of change of management in early March 2010. We haven't visited since.

Kake visited on a Wednesday afternoon in July 2008. There were a few people there when I arrived, but they all turned out to be staff; one other customer did arrive during my visit though. There was music, mostly instrumental, but it wasn't too loud and it added to the ambience rather than detracting from it.

Along with chair and table seating for about 25-30, there are a couple of sofas arranged around a low coffee table; and they also had a few tables out on the street on my visit.

The menu is fairly simple, though they also have daily specials, which on my visit included vegan sushi (somewhere around £5-6, I think). They're not licensed, but you're welcome to bring your own, and corkage is only £1. There are a number of gluten-free options, and there's also a children's menu (starting at £1.75 for a banana and peanut butter toasted sandwich).

I tried the Pogo burger; this was £3.50 on its own, and I upgraded it to include salad and potato wedges for an extra £2. Confusingly, they didn't ask whether I wanted it with salad and chips, but whether I wanted it as "a starter or a main" — the burger itself really wasn't very starter-like, being fairly substantial.

The burger was OK but not great; it would have been better if both halves of the bun had been toasted (the top was toasted and the bottom wasn't, leading to a lack of textural contrast between burger and bun), if the mayonnaise had been spread more evenly, and if the tomato had been sliced properly. The salad was good though — partly mixed leaves, and partly chopped vegetables in a creamy sauce — and the potato wedges were also fine; although they were pre-seasoned, the seasoning was just right. I also had some freshly-made apple and ginger juice (£2.10), which was really very good.

They have free wireless internet, which worked for me no problem.

Kake's verdict: I'd come back, but I don't think I'd order the burger again.

Bec and friend visited August 2013. The menu, decor and ethos remains the same. The daily special of basic Italian risotto was simple and cheaply priced at £3 for a main sized portion.

Accessibility: Two steps up to get in, but once you're inside it's all step-free, including the loo. It is fairly full of furniture, though, and I'm not sure you'd get a wheelchair into the loo very easily.