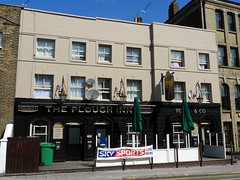 Now closed; previously a Young's pub near Wandsworth Road Station. The June/July 2012 issue of London Drinker magazine reports that it has been sold by Young's, and that the furniture and fittings have been removed.

bob, Elvum and Ilmari visited on a Friday night in December 2008. The Young's Special was fine.

There was music and several screens showing sport. The clientele was mostly younger people getting cheap drinks before going to one of the bars nearby.