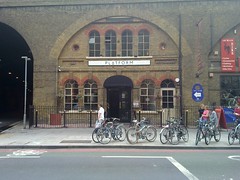 Restaurant and bar under the arches at London Bridge Station that closed at the end of 2012. Confirmed visually by bob January 2013 also mentioned on twitter.

bob visited on a Saturday afternoon in July 2010. There were several tables of customers when I arrived a little before 2pm (it was less busy when I left an hour or so later).

I started with black pudding and fried egg on toast (£6) photo. The black pudding was very tasty, and the egg was perfectly cooked, though the toast was merely OK. For my main I had Gloucester Old Spot pork, apple, and sage pie (£12) photo. The pie wasn't a true pie, as it was missing its bottom crust, but the filling was very tasty nonetheless. Some very good chips came on the side. I finished with a cherry clafoutis (£5.50) photo, which was fine.

They do have a handpump for real ale — on my visit this had a clip for Marstons EPA, though this was actually off (and they hadn't turned the clip around to indicate this, as they should have). Instead I had two bottles of Kernel Brewery porter (£4.75), which were served chilled in chilled glasses photo. This isn't an ideal way of serving real ale, but it was OK in summer for such a strong-tasting beer.

On Ewan's brief visit in May 2011, the same ale was on the handpull, with again a range of Kernel bottled beers served in chilled glasses.

Accessibility: One step to get in to the ground-floor bar area. Step-free from here to the accessible toilet and the men's toilet, but the ladies' is on the first floor, up a flight of stairs. Most of the dining space is on a raised platform two steps up from the bar area, but there's another dining area on the first floor too. There's some seating in the bar area, but most of it is at high stools and tables.