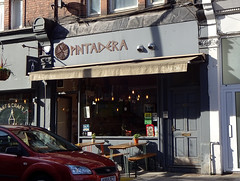 It's quite small, seating only around 20 people inside and a few more on the pavement out the front when weather allows. They are licensed to serve alcohol, including Sardinian beers and wines.

The floor, service counter, and shelves are made from reclaimed wood, and the walls are scuffed cream paint over rough plasterwork. Terracotta containers on each table hold cutlery and paper napkins. The shelves are mainly filled with wine bottles, packets of coffee, and a few groceries such as pasta, but they've squeezed in room for a few bits of art here and there, including a range of small ceramic animals (also for sale).

Kake visited on a Friday morning in May 2019. There were four other customers when I arrived around 8:15am, and more arrived while I was there, some seemingly regulars, until by 8:30am there was only one free table. Music was playing, not too loud.

Eggs on toast with spinach, avocado, sundried tomatoes, and roasted seeds ("Break-sit" on the menu, £9) photo came on a wooden board instead of a plate. It was pretty good overall, though I wished they'd put some butter on the toast — it was quite dry in places, especially given that the yolks of the eggs were set rather than runny. The roasted seeds were a really nice addition.

A pot of Earl Grey tea (£1.90) was made with a standard teabag, but nicely presented with a pre-warmed cup.

Laptop-friendliness: They have WiFi (password on menus and on slips of paper in the cutlery pots) and at least four plug sockets at table height.

Child-friendliness: A baby (in pram) and several children on their way to school were among the customers on our visit. There's a small selection of children's toys and books in one corner, and the wall there is covered with children's pictures.

Accessibility: A step to get in. The loo is up three more steps with no handrail.