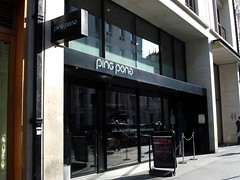 Dim sum restaurant on Great Marlborough Street in Soho, part of a small "modern-style" chain with branches on Goodge Street and near St Paul's Cathedral, among other places.

They do a special deal on Sundays: all the dim sum you can eat (with some exclusions from their menu, but Sam's party didn't feel too put out at not being able to order desserts, daily specials, or 'signature dishes') for £16.50 per person. However, we had to send the bill back to get them to calculate it at that rate, rather than individually — you'd think they'd assume it, but apparently not. Kake notes that the price as of December 2009 has risen to £18.50/person, which is rather more than the £10-12 we usually end up paying in more traditional dim sum places.

None of the food was bad, but a few dishes were particularly memorable. Special mention goes to the squid in satay sauce — a lovely texture and very nicely seasoned. The prawn toast was some of the best I'd had, too. Their jasmine tea is good (made with little dried balls that slowly open out into flowers in your glass) but not good enough to justify £1.95 a glass more than once.

Sam's verdict: Not the most wonderful dim sum restaurant around, but very serviceable indeed.