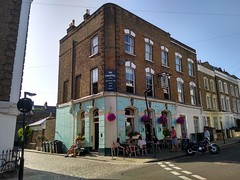 Attractive and friendly pub just away from the main strip in Kentish Town, down one of those side streets where all the buildings are painted various bright colours.

Inside it's been done up in a modern style, although the bar still has its share of locals. Leather seating occupies small alcoves around the bar. In the back room, an extensive conservatory has been added photo, with a beer garden area outside, mostly covered.

We've visited a couple of times now, most recently in June 2019. On a Tuesday evening in October 2008, the conservatory was completely empty (and music-free), though up front the atmosphere was somewhat more convivial. On a Saturday evening in June 2019 it was quite busy but tables were still available.

In October 2008 there were three ales on offer: Bass, Sharp's Doom Bar (£2.80/pint) and one other; the beer was well-kept and the staff were friendly. In June 2019 there were five: ELB Pearly Queen (£4.10/pint) was quite drinkable, and they also had Dorking Red India, Marston's Pineapple, Firebrand New World Pale Ale, and Froth Blowers Kentish Pale Ale.

Thai food is on the menu. In October 2008, Ewan's vegetable green curry (£7.50) was nicely spicy and was served without much delay.

According to a sign outside in June 2019, there's a quiz every Monday evening from 9pm.

Accessibility: A step to get in. Level to the toilets once you're in.