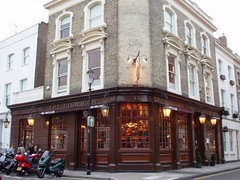 The Pig's Ear was a pub in Chelsea. In Spring 2018 the building was taken over by the REL Pub Co, who opened a new business there called the Chelsea Pig.

An attractive pub in Chelsea, which used to be called the Front Page.

Unlike many pub conversions in posh areas like this, the Pig's Ear remains essentially a pub. There is a dining room out the back and another room upstairs, but the front of this pub remains a place for drinking, with a number of tables arranged around the edge of the room under the windows. Decor is dark wood and stripped floors, attractive without being offputting. Service was perfectly friendly on Ewan's visit.

There are three handpumps for ales, though only two were on during an August 2008 visit, with Deuchars IPA and Uley's Pig's Ear. They also have the usual up-market lagers, and a wine list on the chalkboard above the bar, so presumably it changes regularly.

On a Saturday afternoon, there were enough people to fill the place, but not enough to prevent us getting a seat.