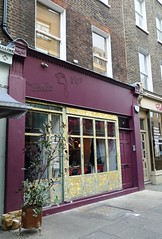 Pieds Nus was a small restaurant in Marylebone, run by the owners of Pied à Terre. It closed down in March 2014.

Opened in late Autumn 2013 by the owners of Pied à Terre and the nearby L'Autre Pied, this small restaurant in Marylebone focuses on simple, 'barely-cooked' food: ceviches, tartares, slow-cooked meat at low temperatures and so on. According to their Twitter feed, the restaurant's Marylebone residence will end on 31 March 2014 (as planned) but a new location is being sought.

The informal decor is 'trendy' in the upcycled Shoreditch sense — unvarnished wood and bare lightbulbs (which were a bit too bright, really). The wine list has several reasonably priced options, some available in large and small glasses as well as 500ml carafes (a carafe of drinkable Bordeaux red was £18 in December 2013).

Kat and Ewan visited for lunch in December 2013. A couple of cheese (possibly parmesan?) straws were laid out on the plates for us alongside the cutlery — they were very good, crispy and flavourful. Our server was happy to provide tap water, this was topped up throughout the meal along with our wine glasses. The staff were efficient but also informal — far more relaxed than at Pied à Terre, for example.

The menu consists of small sharing plates, ranging from £5-£13 photo of menu in Dec 2013. Our server suggested we start with a basket of bread (£4.50) photo and a plate of Iberica ham (a whopping £11) photo. The breads and their accompanying butter and hummous were excellent, the ham was fine.

Our next two dishes arrived before we'd finished the ham — baby artichoke with mushroom and pine nuts (£7.50) photo was lovely, both in flavour and texture. Seared yellow fin tuna with a black pepper crust (£12) photo was also tasty (but very heavy on the pepper). The slow-cooked duck egg with potato and Belper Knolle cheese (£6.50) photo was the only dish that didn't really work — the egg yolk arrived in the centre of what was basically a pile of grated mashed potato and cheese, which we were instructed to mix up with a fork photo. This still could have been awesome in theory but the result was disappointingly just a mush, with no real flavour coming from the ingredients.

Our final two plates were 98° pork belly (£11.50) photo and 82.2° spiced lamb with couscous (£12) photo. The pork belly was fine, with some good crackling, but the lamb was truly excellent — well spiced and tender, not too fatty, one of the best lamb dishes Kat has had in ages.

We shared two puddings: the chocolate and chestnut frangipane (£9) photo was good, with an intense but not overwhelming chocolateyness. The 'deconstructed' New York cheesecake was great, however (£6) photo — beautifully presented and very tasty.

Overall the bill for two people including wine and service came to £110. This seemed reasonable at the time given the quality of the ingredients, but in hindsight the amount of ham we got for £11 was not huge, and I wouldn't bother with that again.

Kat's verdict: I thoroughly enjoyed the meal, and thought most of the dishes worked well. I'd happily return for more lamb and cheesecake.