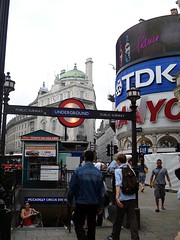 Zone 1 Tube station on the Piccadilly and Bakerloo lines. It's sited directly beneath Piccadilly Circus itself, and although it has no surface buildings it has a multitude of stairway entrances like the one pictured.