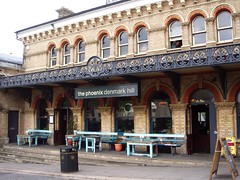 An interesting pub in the old station building of Denmark Hill Station.

When AndrewB and Lesley visited in April 2007 they were selling Adnams Bitter and Young's Ordinary. There was another pump with the clip reversed that appeared to have Greene King beer.

It has had an varied history. It was opened when the station was rebuilt after a fire - hence the Phoenix rising from the ashes. It was one of the original Firkin Brew pubs, then it became part of the Firkin chain. It was next bought by Mitchells & Butlers and has since been rotated through their sub-brands; at one point an O'Neills, it was an Ember Inn on AndrewB's 2007 visit, as of 2009 appeared to have moved to their "unbranded" Castle sub-brand, and as of 2011 is now with the rest of the Castle pubs in the Castle brand.