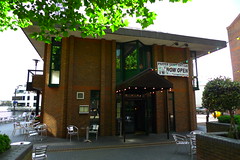 Antic pub on the Isle of Dogs alongside Millwall Inner Dock.

Inside, it's the usual Antic "quirky living room" decor, with standard lamps, sofas, a multitude of cushions, and mismatched wooden chairs and tables. The floor is dark-stained hardwood; the walls are variously dark purple, dark green, and patterned yellowy-green; and a mustard-yellow curtain hangs over the door, held back by a rope tie. Outdoor seating is provided via patio chairs and tables, and there's also some form of balcony upstairs. There's also a pool table upstairs, as well as a large projection screen for showing sports.

Kake and Ewan visited on a Tuesday evening in June 2009. On arrival a little after 5pm, the TV was showing some kind of DIY show or something, with the sound on fairly loud. This was turned down and replaced by piped music (the whinier kind of indie) around 5:30pm, presumably to set the mood for the after-work crowd.

The only real ale available was one from the Purity Brewing Company; it was £3.20/pint and served in a handled glass. A pint of lime and soda was £1.50.

Food is served noon-3pm and 5pm-10pm Mon-Fri, noon-4pm and 5pm-10pm Sat, and 1pm-6pm Sun. Breakfast is served "until 1pm at weekends only", which in combination with the advertised opening hours suggests that it's served noon-1pm on Saturday and Sunday, a grand total of two hours a week — given this, it's a little odd that the first quarter of the menu photo is taken up by breakfast dishes.

They don't advertise any bar snacks other than hand cut chips (£2.50), though when Kake asked if there was anything else they did admit to having olives (£2.50), which turned out to be pretty good — a generous portion of decent enough green and black olives enlivened with cornichons, capers, pickled garlic, and preserved lemons.

Accessibility: Step-free entrance and step-free access to the bar, much of the seating area, and the accessible toilet (which doubles as an extra ladies'). Some of the seating is upstairs, along with the other toilets.