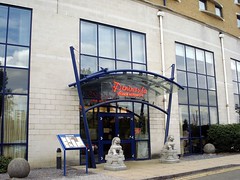 400-seater Chinese restaurant in the Holiday Inn Express at North Greenwich, serving dim sum every day until 4:45pm (as of August 2010).

The decor is relatively basic, with large windows looking out onto the Holiday Inn car park (in which customers of the restaurant get up to 4 hours' free parking, according to a sign seen in August 2010). Like many dim sum restaurants, the place appears to be fairly child-friendly, with a large stash of highchairs stacked against one wall on our visit.

Kake and bob visited on a Tuesday late lunchtime in August 2010. When we arrived just before 2pm the place was still quite busy, though there were enough free tables that we didn't have to wait. Other customers continued to arrive during our visit, and there was a nice buzz of conversation going on among groups of all sizes.

Dim sum is ordered via a sort of computer input form thingy — the names of the dishes on this are in Chinese only, but there are numbers too, and they do match up properly with the numbers on the bilingual main dim sum menu. Some of the reviews linked below mention that you may be told off if you don't fill this in correctly! You need to colour in the little boxes, rather than ticking or circling them.

Char siu bao (£2.30) photo were OK, though heavy on the barbecue sauce and light on the actual pork. Scallop cheung fun (£4.20) disappointingly didn't use whole scallops, but rather chopped scallops reformed into cake/nugget sorta things; the cheung fun noodles themselves were also slightly pasty. Prawn and Chinese chive dumplings (£2.40) featured rather overcooked prawns.

Other dishes were better. Marinated pork knuckle (£5.50) photo was nicely flavourful, and the sesame-scented shredded jellyfish (or was it pork skin?) served alongside gave a good contrast of texture. Chicken feet in black bean sauce (£2.30) photo were among the best we've ever had, with a well-flavoured sauce clinging nicely to the chicken feet and the cartilage softened enough to make it pleasant to eat yet still with some bite. Vietnamese spring rolls (£2.30) had rather oddly chewy wrappers, but the filling was good, with distinct morsels of pork and chopped vegetables giving a varied texture. Siu mai (£2.30) were fine, as were the prawn-stuffed beancurd cakes (£3) photo.

Kake's verdict: The food may not have been outstanding (aside from the chicken feet), but I did like the busy family-friendly atmosphere, and I'd not say no to coming back.

Accessibility: Step-free to get in, and to get to the toilets (which are just to the left as you go in). There's a dedicated accessible toilet.