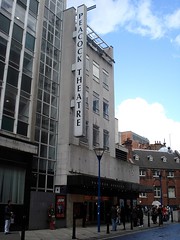 Theatre on Kingsway in Holborn, part of the [Sadler's Wells]? group. Although the current building has only been there since 1960, there's been a theatre of some kind on the site since the 1600s.

Shows mainly revolve around dance and/or singing (opera, musicals, etc). The entrance is just off Kingsway, on Portugal Street. Single, 1000-seater auditorium with both stalls and circle; two bars.