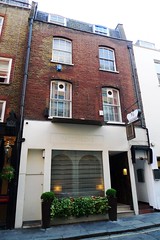 Now closed; was a fine dining restaurant in Mayfair. As of December 2012 the premises are occupied by Alvin Leung's restaurant, Bo London.

The information below is retained for people who want to know what it was like as Patterson's.

A fine dining restaurant in Mayfair, next door to The Windmill pub.

Note: As of July 2012, Patterson's website states that they are "closed until further notice", and a comment on Twitter notes that there's building work going on.

Much like its elegant exterior, the inside is comfortable without being flashy. There are a number of tables receding down the long and narrow room, which on a Tuesday evening is not too busy and allows a table of 6 to be seated easily. Service is as friendly and polite as you might expect.

The menu has a solid modern European feel to it, with a good range of options photo of dinner menu in May 2012. The price for three courses is £47 at dinner, but there are often special offers available on the internet, and we were using an offer for 50% off food, not that any of the food quality seemed to suffer.

An amuse bouche of frothy veloute photo was pleasant. Ewan's starter of squab breast photo was remarkably red inside, but still very tasty. The menu's promise of a sage and filo pastry wrapping didn't seem to be in evidence, but the accompanying confit celeriac was pleasing. Kerry's risotto Milanese photo was superb, and one of the meal's highlights, with the rich creamy textured risotto topped by a tempura courgette flower.

For the main, Ewan's turbot with lobster bisque photo was served with a slightly underwhelming tian of aubergine, and the fish itself was fine, but the undoubted highlight (attracting a supplement) was the bisque, incredibly rich and velvety with chunks of lobster. Kerry's sirloin of beef with seared foie gras photo was cooked as requested (rare) and perfectly decent.

Another highlight, though, was the dessert course. My tarte tatin photo had a good sticky tarte served with icecream and some unctuous caramel, all very good. Other desserts, such as the Pineau des Charentes with melon soup were lovely and well-regarded by our group.