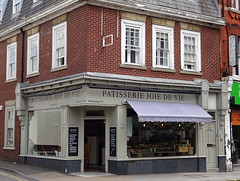 Cafe, bakery, and patisserie in Barnet. They also do fresh juices and smoothies.

It's a reasonable size inside, seating 50 or so people at small, square wooden tables. A feature wall is covered with decorative patterned tiles, and the other walls are neutrally painted and hung with black and white photos. A rather industrial-looking gantry supports a winding line of spotlights below the high ceiling. Cakes, pastries, and loaves of bread are displayed in the window.

Kake visited on a Wednesday lunchtime in May 2017. There were a fair few people in when I arrived a little before 12:30, but plenty of choices for where to sit. Music was playing, too quietly for me to even work out what it was.

The menu includes the usual cooked breakfasts, salads, and sandwiches, but also sweet and savoury crepes, which are also available as galettes (made with buckwheat flour). I chose the ratatouille galette (£6) photo.

The galette itself was fine; nice and thin, and properly cooked through. The vegetable filling was also fine, with the aubergines and courgettes cut small and cooked properly, though some of the red onions were undercooked, and I wished for a bit more tomato to add more flavour. Overall, it felt slightly underseasoned. The fried egg on top was very well-judged, with a still-runny yolk despite having been spread out during cooking thinly enough to cover most of the crepe. The side salad was somewhat perfunctory, but the dressing appeared to be house-made rather than coming out of a bottle.

Child-friendliness: They have at least two highchairs, the type with no tray and very little back support.

Accessibility: No steps to get in, and no steps to the toilet (a spacious single cubicle with pull-down baby change), but there are two fairly stiff doors on the way to the toilet, with a very small lobby in between.