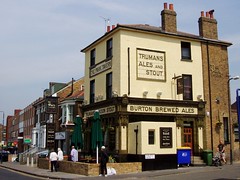 Inside it's perfectly pleasant, but when Ewan and Jo visited on a bright sunny Saturday afternoon in May 2008, the best feature was the excellently maintained beer garden, with plenty of tables and shade from the sun. When Kake visited on a Tuesday afternoon in September 2016, there were a handful of other customers around 1:45pm, and Classic FM was playing, not too loud. Service was friendly on both these visits.

In May 2008 there were four real ales on handpump: Harvey's Sussex Best, Cumberland, Timothy Taylor Landlord, and Flowers; they also had the standard lagers, as well as a wine list including a drinkable pinot grigio. In September 2016, six of the eight handpumps were on, offering Black Sheep Bighorn, something Trelawney, Castle Rock Harvest Pale, Jennings Cumberland, Skinners Betty Stogs, and Truman's Zephyr. The pumps had little sample jars next to them to show the colour of the ale.

On the latter visit, they also had four different Millwhites ciders in bag-in-box, plus the local Eltham Gold Outcider, made with 100% apple juice from Eltham gardens with nothing added" (and which had a note on it stating that unwanted apples were needed, with a contact email address). A pint of lime and soda was originally charged at £3, but when we queried this the price dropped to £1.50 "because it's just soda, not lemonade".

According to their website as of September 2016, food is served at lunchtimes. They also do bar snacks photo of snack menu in Sep 2016. On our May 2008 visit they had a daily lunch menu with a number of basic options, including (for vegetarians) the cheese & egg flan with sauteed potatoes and coleslaw (around £5), which was nothing amazing but absolutely fine, though unfortunately they'd run out of potatoes and had to offer chips to make up the plate.

Ewan's verdict: It certainly seems like this is a good place for a drink in Eltham.

Accessibility: A large step to get in. Two more steps to toilets and beer garden.