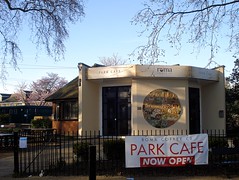 Small cafe in Southwark Park, opened in spring 2010 on the site of the old Parkside Cafe and Bar.

It has only very minimal seating inside; one small table with a couple of chairs, and two tall low-backed stools at a tiny counter in one corner under the TV. There's more seating outside at picnic benches and tables, but this isn't under cover.

Kake visited on a weekday afternoon in March 2010. A mug of tea was £1. There were no menus in evidence, but from the evidence of a couple of specials chalked on a board (chicken soup £2.50, penne with vegetables and tomato sauce £4), they do hot food as well as sandwiches and pastries. The TV was showing Children's BBC with the sound on.

Coffee is supplied by the Roma Coffee Co.

Accessibility: Step-free to get in; haven't checked the toilets.