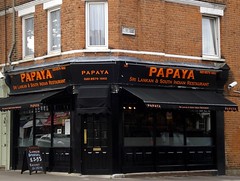 Sri Lankan and South Indian restaurant in Ealing. They used to have another branch in Rayners Lane, but this changed hands somewhere around the end of 2010. They also do takeaway.

The decor is smart and modern; the floor, tables, and chairs are black and shiny, and the walls are dark orange.

Kake and bob have visited twice now, most recently in October 2018.

When Kake, bob, Martin, and others visited on a Thursday evening in June 2009, there were already a fair few people in when we arrived around 9pm. On a second visit by Kake and bob on a Saturday lunchtime in October 2018, there were just two other customers at 12:15pm.

In June 2009 there were 14 of us altogether, so we'd pre-booked. We ordered in smaller groups; at our end of the table we'd already decided to order everything "hot" (choices are mild, medium, or hot). In all, we paid £20/head including plenty of food, a beer or two apiece, and service charge.

Mutton rolls (£3.50 for two in June 2009) had a pleasing level of chilli heat, but Kake felt the breadcrumb coating was a little too thick. Masala vadai (£3) were fine; not too dry. Mini masala dosa with chutney and sambar (£4) was really quite tasty; nicely sour, and well-crisped on one side. Devilled venison (£8) was overcooked to Kake's taste.

Sri Lankan fish curry (£7.50 also in June 2009) was OK, but the fish was again overcooked in Kake's opinion. Dhal (£4) was fine; plenty of flavour. Madura manga kalan (fresh mango and green banana curry, £5) was good, with lightly-cooked mango and a flavourful, not-too-sweet sauce.

In October 2018, Kake tried the vegetable thali (£14) photo, which consisted of cabbage, aubergine curry, and spinach dal along with white rice. It wasn't particularly thali-like in presentation, but the range of textures and flavours was good. The aubergines were well-handled, not too soft, with the right amount of chew in the skins, and with a nicely savoury sauce; they also had the only hint of chilli heat in the entire meal. The dal was cooked just right, with a little bite left to the lentils but no chalkiness. The cabbage was juicy and crunchy. Unfortunately the rice was slightly undercooked, which somewhat spoiled the overall effect.

Also in October 2018, bob had the lumprais (£16) photo — a Dutch-influenced dish comprising rice cooked in stock and served with two curries, seeni sambal (a type of onion chutney), a fish cutlet, and a boiled egg. Again, unfortunately, the rice was undercooked. One of the curries was aubergine, apparently the same as the one in Kake's thali. The mutton in the other curry had a good texture with just the right amount of chew. The seeni sambal had a pronounced cardamom flavour and wasn't too sweet.

Kake's verdict: They seem to have toned the spice way down on our second visit, which is a shame. The prices are also higher than usual for Sri Lankan food in London, whereas the food quality is not.

Accessibility: Very small ramp to get in. Step-free through to the toilets, though the doors of the cubicles are a bit stiff.