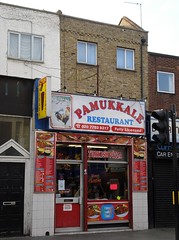 Pamukkale was a Turkish cafe on Walworth Road; it has now closed. As of February 2010 the site has signage up for a new place called "Entree".

The information below is retained for people who want to know what it was like as Pamukkale.

Newly reopened Turkish cafe on Walworth Road in Walworth. It does takeaway and has an eat in section at the rear.

secretlondon visited one Saturday in December 2008. I had a mixed kebab (£6.80) photo and a cup of Turkish tea (£1). Turkish TV was on the background. They appear to be licensed.

They also do pide (Turkish pizza), lahmacun (flatbread topped with minced meat), and soup. According to a sign in the window, all the food is halal. Posters say they are open until 5am with a DJ every Friday and Saturday. Wooden tables.