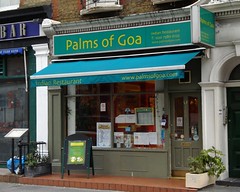 Both remaining branches of this South Indian/Goan restaurant closed in mid-2012. The other branch was in Soho, Palms Of Goa, W1F 0EF. The New Cavendish Street branch is being replaced by a restaurant called Chillies as of November 2012.

One of the two Fitzrovia branches of a chain of South Indian/Goan restaurants in the West End, the other one being on Charlotte Street. Until some time around 2008 the restaurant on the New Cavendish Street site was known as 'Neel Kamal' or 'Neel Kish' (depending on who you ask).

Kat visited with a group of six others on a weekday lunchtime in mid-December 2008 — we were the only customers at first, a few smaller groups arrived throughout lunchtime.

Most of the group opted for thalis ('vegetarian', 'non-vegetarian' and 'fish' options were available, all around £11-£14). All were proclaimed very tasty, although the portions could have been a little bigger for our hungry party. Kat opted for a Pork Mas (£6.50), described as a medium-hot dish with vinegar, ginger and garlic. Although it was enjoyable and not at all oily, I couldn't really taste the vinegar and it wasn't very hot - I was left thinking that I should have gone for the vindaloo after all. The side dish of Paneer Pakora (three for £3.50) was a little on the dry side but the batter was lovely, and was good comfort food for a cold winter day.

The staff were friendly and helpful, and the service was quick - though if I was in the area I would probably only bother to come here again if Ragam (1 minute round the corner) was full.