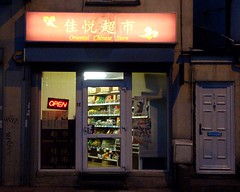 Oriental Chinese Shop was a Chinese grocery shop a few doors along from Surrey Quays Station. It has now closed. According to Google Street View, by April 2015 it had been replaced by a beauty salon called KUB.

Chinese grocery shop a few doors along from Surrey Quays Station. Its Chinese name is 佳悅超市.

This may be the tiniest Chinese supermarket in London. It's a single small room with shelves around the edges plus a small free-standing unit in the middle. The two "aisles" are so narrow that it's almost impossible to see what's on the lower shelves. Nevertheless, there's a fair range of stuff in here, and they've even found room for a couple of freezers toward the back.

The stock appears to be aimed mainly at students, with a fair bit of the space taken up by sweet and savoury snacks. There's sachets of pickled vegetables and shredded kelp, and packets of seasoned dried tofu. The freezers contain hotpot ingredients such as fishballs and thinly-sliced meats, as well as various types of dumpling.

There's a small selection of noodles and rice, though none of the huge sacks of rice you might find in other Chinese supermarkets. A small fridge by the front door holds a few fresh vegetables like pak choi and oyster mushrooms, as well as a few kinds of fresh and fried tofu.

Accessibility: Two steps to get in, and very little room to move around inside.