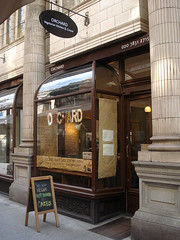 Orchard was a vegetarian cafe in Holborn, located on the pedestrianised Sicilian Avenue near Holborn Station. It closed down around May or June 2015.

Vegetarian cafe in Holborn, located on the pedestrianised Sicilian Avenue near Holborn Station.

It's quite small inside, long and narrow like the other units on Sicilian Avenue. There's seating for around 28 people on the ground floor and a further 7 or 8 in the basement. Decor has a '70s wholefood vibe, with pastries displayed on wooden shelves and the daily specials written up on large sheets of brown paper on the walls photo. Furniture is wooden and mismatched, including at least one instance of a sideboard being used as a table.

Kake and Ewan visited on a Wednesday lunchtime in March 2015. There were a handful of other people in when we arrived a little before 1pm. No music was playing, but it was quite noisy anyway due to the small space and lack of soft furnishings.

Aubergine, polenta and red pepper terrine with mature cheddar (£7.75) photo looked attractive and colourful and was a substantial enough portion, but the texture was rather gloopy, not helped by the thick, floury white sauce trailing around it on the plate.

A side dish of tenderstem broccoli with watercress and roasted peanuts (£2.80) photo, on the other hand, was crisp and refreshing, and went some way towards alleviating the stodginess of our mains.

Service was fine, and tap water appeared swiftly on request. No service charge was added to the bill.

Accessibility: No steps to get in, but the toilets are in the basement down a narrow, steep staircase with a non-continuous handrail on one side; also, access to the ladies' is very narrow.