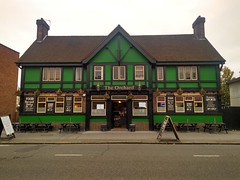 The decor is unashamedly traditional, with some rather fine painted mirrors behind the bar. Live sport is shown on two televisions and a large projection screen. There's also a beer garden with a covered area for smokers and an adventure playground for children.

Signs outside proclaim a "selection" of real ales on tap, but when elvum visited on a Sunday in April 2008, only one of the four hand-pumps was in operation, serving Old Speckled Hen in mediocre condition. The pub serves food, which we didn't try — roast dinners (£7) are served all afternoon on a Sunday, and the example we saw was a generous portion, if not an especially appetising example of the genre.

Northern Steve and Amy visited on a Saturday in March 2018 for the football. The only real ale on was Sharp's Doom Bar (£3.95/pint), again in mediocre condition, although they did also have Chieftain available. The regulars were pleasant enough. The pub smelt of used chip fat, but the cheesy chips and onion rings were adequate (and clearly handmade).

Accessibility: Unusually for the area, the pub has its own car park.