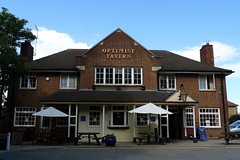 Pub on the outskirts of Upminster, part of the Ember Inns chain (owned by Mitchells & Butlers).

Inside, it's reminiscent of a hotel bar, though not really in a bad way. The fairly large interior is broken up — some might even say "cluttered" — by pillars and shelving units with ornaments on. The carpet is orange-brown, and the rest of the decor is colour coordinated to match, in a fairly soothing way that nevertheless has the feel of something dictated by head office rather than chosen by an individual (Ewan noted many similarities to the Railway in Hornchurch, also an Ember Inn). Different seating areas offer leather sofas and armchairs, high banquette seating, or barstools. There's also a beer garden out the back, with picnic benches, and more outside seating at the front next to the carpark.

Kake and Ewan visited on a Monday afternoon in July 2009. Real ales available from the six handpulls were Adnam's Broadside, Bombardier, Greene King IPA, and Bateman's A Taste of Heaven. Rather cheesy music was playing, a little too loudly for comfortable conversation. There were quite a few people in when we arrived around 4:30pm; small groups in lively conversation, as well as lone drinkers reading the newspaper.

Food is served noon-9pm every day.

Accessibility: No step (possibly a small ridge) to get in, and there's an accessible toilet signposted (but we didn't check it). Other toilets are up a flight of stairs with a bend in the middle and a sturdy handrail. It's step-free to the bar and at least some of the seating area, but part of the seating is at high tables, and there's not much free floorspace between the tables.