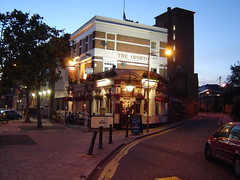 This locals' pub was refurbished and renamed as The Westferry Arms photo in December 2012, according to the pub's website.

Pub in Limehouse near Westferry Station.

This is a busy pub that has grown in popularity over the years. Punch Taverns own the property and they have spent out, notably on an outdoor covered smokers area at the front of the pub.

There is a single bar, TV screen and they often have a karaoke session. Friendly staff and a good atmosphere.

When Loopzilla visited in March 2008, they were serving Greene King IPA from a single handpump. However as of late 2011, London Drinker reports that the handpump has been removed.