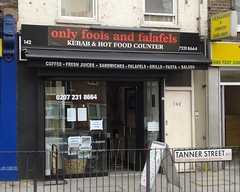 Only Fools And Falafels, SE1 2HG

Only Fools And Falafels, SE1 2HG

Only Fools and Falafels was a small Middle Eastern takeaway in Bermondsey, just to the east of Tower Bridge Road. It opened in Spring 2010, but closed less than a year later. As of May 2011 there's a sign on the frontage saying that the premises are available but under offer.

Small Middle Eastern takeaway in Bermondsey, just to the east of Tower Bridge Road. It opened in Spring 2010.

Inside, there are a couple of tall stools at a counter, but it's really focused on takeaway rather than eat-in. Somewhat incongruously, they also have shelves of groceries for sale: pasta, Marigold stock powder, various teas, and Green & Black hot chocolate mix.

Given the name of the place, it's a little odd that fuul (beans) don't appear on the menu, but they do extra dishes at lunchtimes so perhaps the fuul put in an appearance then.

Kake visited on a Thursday evening in April 2010. There were four other customers waiting for their orders when I arrived. There may have been some problem in the kitchen, since my order of falafel in pitta took 25 minutes to be prepared and arrived at roughly the same time as the other people's. They did give us each a free espresso cup of (decent enough) mushroom soup while we were waiting, but no explanation of why it was taking so long.

Egyptian falafel and salad in pitta was priced at £3, with 50p extra for added aubergine or feta; I asked if I could have hummous as an extra instead, and they were happy to do this (also charged at 50p). This was perhaps a mistake on my part; they put quite a lot of hummous in, and the falafel and salad got a bit lost. The hummous wasn't entirely to my taste either, though this could be due to its being Egyptian-style. To the extent I could distinguish them from the hummous, the falafel were good — not dry at all. Chilli sauce (optional, free) had a decent amount of heat, and the pitta was nice and soft.

On another (attempted) visit on a Monday lunchtime in June 2010, they weren't open despite it being half an hour past the previously-advised opening time (we later learned that they opened an hour late because of staffing problems). Later in the same week, they again weren't open despite it being an hour and a half past the alleged opening time. In March 2011, the shutters were down at 12:30pm, half an hour after Kake had expected it to be open.

Kake's verdict: The food was certainly worth the price, but perhaps not worth the 25 minute wait (and comments on the LondonSE1 thread linked below suggest that the long wait is a common occurrence). My 33% success rate at finding the place open is also somewhat offputting.

Accessibility: Very small step up to get in, more of a ridge really. Access to the till area is a bit narrow, and the place as a whole is quite small.