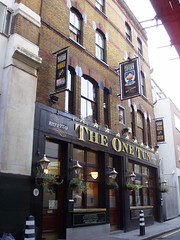 Note that it's closed on weekends.

The signage makes much of its history as a "18th Century Tavern", but the decor and ambience are very much that of a standard traditional 20th century pub, with a patterned carpet, half-frosted windows, a wrought iron gantry over the bar, and an illuminated bar back sign advertising Manns (a defunct London brewery). Tables are square, varnished wood, and a reasonable size, while seating is provided by a mix of banquettes, low stools, and a few chairs. There's plenty of standing room around the bar, as well as a few bar stools.

There's a tiny enclosed courtyard out the back for smokers, with just one small normal height table and two taller ones for standing at. It does have a pull-out canopy for sheltering from the weather.

Kake and Ewan visited on a Monday afternoon in September 2011. There were a few other customers in, all men, some in suits. Music was playing — basic MOR on the Magic TV music channel. Three of the four handpumps were on, offering Brakspear Oxford Gold (£3.20 for two halves), Adnams Bitter, and Wadworth 6X.

Accessibility: A step to get in. Stepfree to bar and seating area once you're in (can't remember about the smoking courtyard). There's a door marked "disabled toilet" on the ground floor, but it was locked on our visit (and not with a RADAR lock). The other toilets are in the basement, down a straight stairwell with a handrail all the way down.