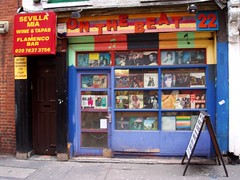 On The Beat was a classic second-hand record shop on Hanway Street, near Tottenham Court Road Station. It has now closed. As of March 2016, the premises are occupied by a cafe called Chez Mamie photo

This shop represents some kind of ultimate expression of the second-hand record shopping aesthetic. Walls covered by rare 7" single and old LPs, crumbling copies of antique issues of the now-defunct Melody Maker music weekly (among many others), and the odd poster and tour programme. Racks of old vinyl of all descriptions compete with a smaller selection of CDs. VHS videos sit up behind the counter, and DVD barely gets a look in.

The selection is mostly pop and rock, soul and funk, with an extensive selection of 60s girl singers, though most other genres are covered as well. Huge numbers of 7" singles line the front of the counter as you walk in the shop, kept away from prying fingers by metal bars preventing them being removed.

It has the feeling of going through someone's personal record collection. On my visit on a weekday afternoon the shop was fairly empty, so the proprietor's gaze was fixed on me most of the time. I didn't end up buying anything, but perhaps from being overwhelmed by choice.

I'd definitely recommend a visit if you're looking for anything old or on vinyl.