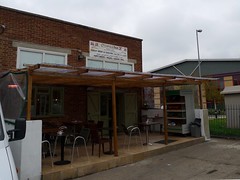 Omnia was a Middle Eastern bakery with a delicatessen and takeaway attached, in a somewhat bleak stretch of Park Royal industrial units. According to Google Street View, it closed down by August 2014.

A Middle Eastern bakery with a delicatessen and takeaway attached, in a somewhat bleak stretch of Park Royal industrial units.

There are a few seats on a covered outdoor patio for eating, while inside is a takeaway counter and food shop selling Middle Eastern foods, spices, fresh vegetables and the like. Most of the business would appear to be commercial, however, with vans loading up at their factory nearby.

However, the food they offer is all freshly prepared and good value. The website has photos and explanations of a number of dishes, though the in-store menu does not give such helpful explanations, so knowing what you want is a help. Staff are perfectly friendly though.

Foods break down into sandwiches and wraps (popular with the lunchtime takeaway customers), sharing dishes (hummous, falafel, vine leaves, et al.), and manakish, a type of thin crust pizza. On Ewan and Kake's visit, we went for the latter, one with spinach and the other with zaatar and cheese (each £3). They were brought out cut into quarters. Both were very tasty, the spinach manakish having a lemony tang photo, while the zaatar was subtle on the other, though there was no shortage of cheese photo.

Accessibility: A step up to get onto the patio. Not sure if there's an additional step to get inside.