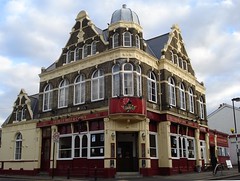 Pub in Walthamstow, with a theatre upstairs. It serves real ale, and it's in the Good Beer Guide.

It has a fairly traditional interior, with the usual patterned carpet on the floor. Some of the seating is up on daises, nicely partitioned off with wood panelling and engraved frosted glass screens. Wines are chalked up on a blackboard behind the bar, and a small collection of flyers at one end of the bar advertises local, arty, and FairTrade concerns. Wrought-iron lamps hang from the high ceiling. There's some outside seating at the front too, on a forecourt open to the pavement.

Kake visited on a Monday afternoon in October 2009. Four handpumps were on, offering Brodies Red (£1.50/half), Brodies IPA, Adnams Explorer, and Thatchers Heritage (the first two of these are brewed just down the road at the Sweet William). There were about half a dozen other customers in throughout my visit (roughly 5pm-6pm). There was no music playing, and conversation was quite subdued.

Kake visited again on a Friday early evening in July 2015. Five of the seven handpumps were on, offering Naylor's US ALE, Bays Devon Dumpling, Shiny Brewing Dealer Button, Saltaire Elderflower Blonde (£3.40/pint), and Addlestones Cloudy. A pint of lime and soda was £1. Unsurprisingly it was busier than my previous visit, being a Friday, though even by 6pm there were still free seats as several people were sitting outside and there was also quite a crowd standing in the narrow area by the bar. Music was playing, not too loud.

They don't do food all the time, but according to their website as of July 2015 there's a mobile pizza kitchen on the forecourt on Wednesday, Thursday, and Friday evenings when weather allows, and they also do Sunday roasts. On our July 2015 visit the pizza kitchen was in full swing, and seemed very popular.

On our October 2009 visit there was a pool table in a large seating-free space at the back, but we're not 100% sure this is still there; on our July 2015 visit it was a little hard to get back there to check.

A flyer seen in October 2009 advertised live jazz on the first and third Thursday of the month, starting at 8pm with entry costing £5. It wasn't clear whether this happens in the main part of the pub or upstairs.

Child-friendliness: One of the cubicles in the ladies' toilet has a pull down baby change table and a nappy bin. Gents' not checked.

Accessibility: Level access via the right-hand door, but to get to the ladies' you need to go up two steps and down another two.