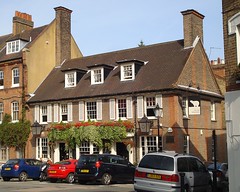 The Old White Bear was a gastropub in Hampstead. It closed in February 2014 after being sold to property developers, though as of the time of writing there's a campaign to reopen it as a pub.

Gastropub (or self-described "restaurant and bar") in Hampstead.

Previously a traditional real ale pub (as the Olde White Bear), it reopened under new management in March 2010. The focus and ambience have changed completely, though there are still two handpumps on the bar; in July 2013 these offered London Fields Hackney Hopster (£1.95/half) and Sharp's Doom Bar.

On a Friday afternoon in July 2013, most of the tables were already set with cutlery, napkins, and glasses photo, though a couple were left bare for drinkers. Music was playing, not too loud.

Kake tried one of the bar snacks, the broad bean puree with bruschetta (£4.50) photo. This was pretty good, with a nice texture and flavour to the puree. The thin shavings of parmesan on top went well with it, and the accompanying bruschetta was made with good bread, competently toasted.

Kake's verdict: I enjoyed the food and would consider coming back for more. However, despite the friendly service, the ambience doesn't really appeal to me; it's just a bit too posh (an impression not helped by the casual bigotry being expressed by the customers at the table next to me).

Accessibility: A large step to get in. Toilets are up another flight of steps.