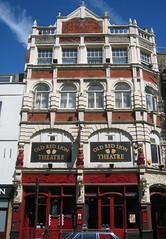 Nice old-fashioned pub a short walk from Angel Station, between the station and Sadler's Wells. Usefully located right opposite Electrowerkz.

There's a theatre upstairs and a beer garden of sorts (concrete with benches and tables, but they've painted the walls) out the back. Lots of plush red furniture, banquettes along the length of the wall, quite dark, in a room which stretches quite far back. Some attractive old frosted-glass partition walls section off an area near the front windows.

It sells reasonable, well-kept beer. In April 2008 a pint of Tim Taylor's Landlord was £3, and they also had Harvey's Sussex Best on tap. In November 2008, bob noted both of these as well as London Pride, Adnam's Broadside and Abbot Ale, all around £3 a pint.

Juliet has most often visited on a Friday or Saturday evening and usually been able to find a seat. However, on the 27 April 2007 (a Friday evening) they were running a very loud DJ evening (ska, mostly) which made the place rather unpleasant. Unsure yet whether this is a permanent feature. It was still reasonably quiet out in the beer garden. Visits by bob and Ewan on Sundays have found the place fairly quiet and perfectly pleasant.

Sport is shown on two satellite TVs, and there is a large projection screen too.