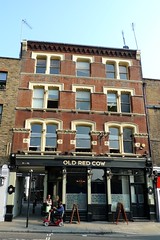 A fine pub for beer drinkers, just on the south side of Smithfield Market. As of mid-2011 it was taken over by the same people behind the Dean Swift in SE1.

There's a small downstairs area by the front entrance, mostly just set out for standing room with some tall tables and stools in the middle of the limited space. Upstairs are a couple of banquettes with a table forming a windowed booth looking down the street behind the pub towards The Hand and Shears, while three long tables and one small run mostly under the front windows (with one just at the top of the stairs) photo. There are additional stools at the upstairs bar.

There are four handpulls available for ale downstairs, two of which had beers on (Sambrook's Wandle and Redemption Hopspur) when Ewan visited in April 2011. In keeping with the "Local Beer House" theme of this burgeoning chain, it is likely that cask ales will mostly be locally sourced.

There are also 12 keg taps arrayed along the stainless steel bar back downstairs, all of which are also available on taps along the bar upstairs photo. A list of these is displayed prominently by the bar, but includes Harviestoun Bitter & Twisted, Camden Pale Ale, Maisels Weisse, Schremsen Pils, Veltins, Steigl, Guinness, Thatcher's Gold cider, and three rotating taps: one for a BrewDog beer (Punk IPA on Ewan's visit), one for a US beer (Brooklyn Lager), and one house lager ("Belgian" on Ewan's visit, about which the bar staff were not able to provide further information).

It appears to be open at the weekends, which is when Ewan has passed it, though the few people drinking in there will hardly be a guide for its popularity during the week.