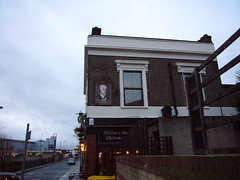 This pub in Bow closed in August 2013. The Dec 2013/Jan 2014 London Drinker magazine reports that it's been sold to a property developer and there's a planning application in to convert it to flats.

Note: As of August 2013 Loopzilla suggests that it may have closed.

Tucked away from the main drag near Devons Road Station, it has a single bar with five or six tables and two TV screens. The customers used to be mostly postal workers from the depot across the road, but as of October 2009 the postal workers have disappeared.

This pub is also known as "Millie's" and often brings out a few rounds of sandwiches (at half time if there is a football match on the screens).