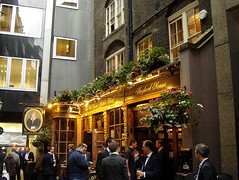 Shepherd Neame pub in the City.

It's down a narrow alley which runs between Coleman Street and Basinghall Street, and there's very little natural light inside, even right at the front. There's a fair bit of standing room by the bar, and a raised area at the back with two flatscreens, dim orange/red lighting, and tables suitable for larger groups. The bar has an impressive six handpumps.

Kake visited on a Tuesday early evening in September 2008. Beers available were Spitfire, Masterbrew (£1.40/half), Kent's Best, and Whitstable Bay; Bishops Finger had just run out.

I arrived around 5:15pm and it was already starting to fill up, though there were plenty of seats left at the large tables on the raised area at the back. The flatscreens were showing Sky Sports News with the sound on. Happily, there was no piped music attempting to compete with this.