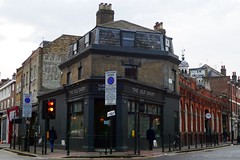 A vast and cavernous former dairy (as the name suggests), located just near Crouch Hill Station at the top of Stroud Green Road.

Note: In October 2020, Greene King announced that 79 of its pubs would remain closed during the period of Covid-19 restrictions, and that around a third of these would close permanently. The Old Dairy was one of the 79; however, according to an email from Greene King Guest Relations in February 2021, no decision has been made yet over the long-term future of the pub, so it may well reopen once social distancing is no longer necessary.

There's something a little disconcerting about somewhere so big, but it's decorated nicely and laid out with solid wooden chairs and tables (though some can be rather rickety), and a good number of leather couches. The area where Ewan ended up on one visit had two leather armchairs and a mirrored coat/hat stand.

There's a separate dining room area along the Crouch Hill side, which is filled at the weekends by parents and children. A couple of other rooms branch off from the main area, some of which are cosy and quiet and others (such as the one by the intersection, with its surrounding of pane glass) can get quite noisy.

They show sports on a big screen occasionally, and there's also a bar billiards table by the entrance. A music pub quiz was advertised on a Wednesday on a visit in August 2008, but can't be sure how often it runs.

On tap are London Pride, Flowers IPA and Hooky Gold (though Pride was off on an August 2008 visit). Draught lagers include Leffe and Hoegaarden, as well as Addlestone's cider. In Mar 2008, a half of Leffe and a black coffee came to £4.45, which is fairly expensive.

Food is served noon-3pm and 6:30-10:30pm Monday to Saturday, and noon-9pm Sunday. The food menu looks pretty decent and not quite as expensive as the nearby Noble (which in general is a smaller, cosier place for a drink); there's a separate bar menu and dining room menu (though the latter can be served throughout the pub). I haven't sampled the food.

The huge space attracts a lot of large groups of locals, and it can get a bit overwhelming at times. However, it's certainly not a bad place for a drink.