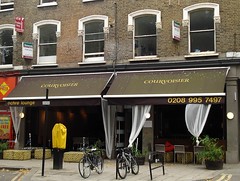 Ochre Lounge was a Lebanese/Indian restaurant/bar in Chiswick. It has now closed. As of mid-2011 the premises were occupied by a modern European restaurant called Hedone, which closed in turn in mid-2019.

bob and Jack visited on a Wednesday lunchtime in July 2009. We were the only customers during our visit. We both had the Lebanese lamb meal (£6) photo. This comprised some marinated grilled cubed lamb, which was fine, a quite light and doughy pitta, some reasonable tabbouleh, some OK hommous, and some disappointing pastries. We also shared a Lebanese salad (£3.50) photo, which was fine. A bottle of still water was £3 and was not chilled. Coke was £2 and flat.

There is no step to get in, but the toilets are probably downstairs.