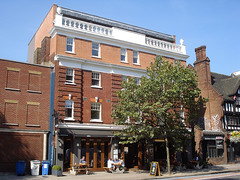 Pub/bar/restaurant in Kennington, in the Good Beer Guide.

It's run by a sister company to the Cambridgeshire brewery Oakham Ales, and so several of Oakham's real ales will always be on offer. They have an unusual policy of only selling thirds, two-thirds, and pints — half-pints are not available.

It's quite smart inside, with a hardwood floor and lots of dark wood. Mirrored pillars break up the space while confusing the eye slightly photo. An embedded circle motif in the floor is echoed behind the dark wood bar photo.

Entry is into the bar area, with a sofa and some upright chairs and tables plus a few bar stools at a high table to one side beneath a flatscreen. The seating leads round into what looks more like a restaurant area, set with wine glasses and napkins. There's picnic bench seating out the front.

Kake visited on a Monday lunchtime in September 2014. There were three or four other customers at 1pm, with more arriving during my visit. Peaceful music was playing, not too loud. Several Oakham real ales were on the handpumps, and the staff member on duty was happy to offer me tasters. Two-thirds of a pint (see above) of Endless Summer was £2.50.

In September 2014, Kake tried the nasi goreng (£6.50 from the lunch menu) photo. It arrived very quickly, but was clearly freshly cooked rather than reheated. The dish included a generous amount of decently-flavoured chicken, two or three competently-cooked king prawns, green and red peppers, some well-judged broccoli — crisp and not overcooked — and some similarly well-judged peas. The oil level was nicely controlled, neither too dry nor too greasy, and a subtly fishy savoury aroma suggested the use of shrimp paste. There was a reasonable amount of chilli heat, though not overwhelming. On the side were some fresh, crisp prawn crackers and a skewer of chicken satay in a not-too-sweet peanut sauce.

Accessibility: A ramp to get in. The bar, all the seating, and the accessible toilet are on the same level. Other toilets are down a flight of stairs with bends and a sturdy handrail all the way down on one side and most of the way down on the other side.