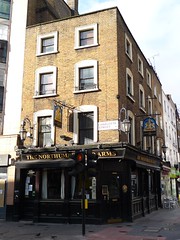 This pub closed in September 2011. A sign on the pub's window indicated it would be reopening in early-2012 following a refurbishment. As of August 2012, it has now reopened as a branch of the Draft House (or "Draft House Charlotte").

A small corner pub in Fitzrovia, on Goodge Street, which used to be a Nicholson's pub and retains some of the old signage.

Catering to the local office crowd, this is a decent pub, but a very small single-room affair, though with some antique glass partitioning to break it up a bit. There are a few small two-person tables down the back and a couple of larger ones nearer the door. It can get busy, but there were still tables available on Ewan's Wednesday lunchtime visit.

There are five handpulls for ale on the bar, three of which appeared to be in use as of October 2009, dispensing Landlord (£1.55/half) and London Pride. There's also a range of draught lagers including Staropramen, Erdinger, Back's Vier, as well as Addlestone's cider.

The food menu is fairly short but specials marked up on a chalkboard outside change regularly. Ewan had a (vegetarian) sausage sandwich for around £6 which was served in plain white bread and came with some nice chips and a small bit of fresh salad, not bad at all for the price.