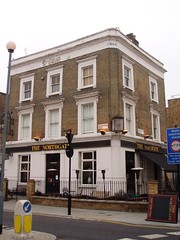 The Northgate was a gastropub in De Beauvoir Town in North London. It has now closed, and a new business called the De Beauvoir Arms has opened up in the premises under new management.

This pub has a large single room curved around the bar in the middle, divided into a drinking area at the front of the pub, with a restaurant (and open kitchen) to the rear, on a couple of levels, as well as a large patio and a heated, covered smoking area along the street.

There are three handpulls in the middle of the bar, with Deuchars IPA and London Pride apparently regulars, and Wadworth 6X the guest ale (£2.90/pint). Both the Deuchars and the Wadworth were perfectly fine. There are also the usual lager choices for the more discerning establishment — Staropramen, San Miguel, Hoegaarden, Leffe et al.

The food menu is marked up on chalkboards around the pub, as is a wine list behind the bar, so presumably it changes regularly.