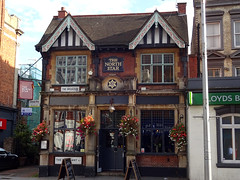 It's long and narrow, and seems to have once consisted of three rooms; these have now been knocked through into one, though remnants of the partitions remain. Lighting is provided in the currently-fashionable "bare bulb" style, augmented by fairy lights around the large windows at front and side, though dark-painted ceilings make it feel a little gloomy despite this.

Paintwork on the wood-panelled walls is deliberately distressed, and brickwork on some of the walls has been left exposed. The floor is varnished wood throughout, and seating is a mix of sofas, banquettes, and low and high upright seating. A part-covered patio area runs along the side of the pub.

Kake first visited on a Tuesday early evening in September 2017. There were a fair few people in when I arrived around 5pm, but still plenty of free seats. Music was playing, quite an interesting selection, slightly louder than ideal for conversation. The situation was similar on a Thursday afternoon in November 2017, except that the music was at a more sensible volume.

There were four real ales on in September 2017: Moles Mole Catcher, Long Man American Pale Ale, St Austell Tribute, and Sharp's Doom Bar. A pint of lime and soda was 65p (by November 2017 this had risen to 70p).

Food is served all day, and includes bar snacks such as sweet chilli squid and salt cod croquettes.

They have free WiFi provided by O2 (requires registration).

Accessibility: Step-free access through beer garden via ramp at side entrance. No steps to the toilets once you're in, including a RADAR-locked accessible one.