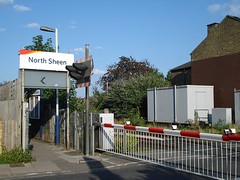 Zone 3 rail station on the Kingston Loop Line and the Hounslow Loop Line. Trains to Waterloo.

The station is reached via a lane which leads off Manor Road to the east, just next to the level crossing. Be warned that if you're coming from the south you will have to cross the level crossing, and apparently there can be very long waits at times. There has been much discussion of building a footbridge; the situation as of April 2010 is described here.

Accessibility: Not very accessible at all — it's reached via a footbridge with steps and no ramps.