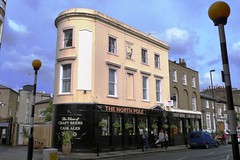 The North Pole was a craft beer pub in Islington (towards Hoxton). According to the Apr/May 2016 London Drinker magazine, it has now closed and been replaced by a film-themed pub called North By Northwest.

A craft beer pub in Islington (towards Hoxton), it was formerly the North Star but reopened under its new name and management on 21 June 2012.

This is an open and spacious pub inside, with a room along the front of the building, as well as seating to the right of the bar by the kitchen counter, and further seating up some steps to the side of the entrance. There are also tables and some large couches out the back in a beer garden accessible from the street.

The chief attraction, however, is probably the extensive selection of beers on both handpull and keg. On Ewan's visit on opening night, the ten handpulls dispensed ales from Dark Star, Bristol Beer Factory, London Fields, Cottage Brewing and others, as well as a couple of ciders. The draught taps had a couple of Meantime beers (London Lager and London Stout), a couple from Harbour Brewing (including an excellent Double IPA), Brooklyn Lager, Anchor Liberty Ale, Flying Dog, Innis and Gunn Original, Schneider Aventinus, Vedett and others. Ale was well-priced for the area (£3.20/pint) and well-kept.

On opening night, a hog roast had been set up, and was giving out free pork buns photo. The regular menu runs to the usual pub offerings, but looks to be decent. Ewan also tried a bowl of chips (£2), which were chunky and good quality, not very greasy or crispy.

A jukebox photo was not yet functioning on Ewan's visit. However, music was playing, not too loudly. There's also a piano.

Ewan's verdict: This is a nice pub with the potential to be great. It's a bit remote from transport, but worth the extra walk.