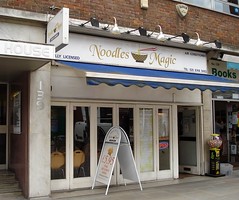 Noodles Magic was a Thai restaurant on King Street in Hammersmith. It has now closed, to be replaced by a new retail/housing development called The Kingsley photo of worksite in February 2016.

Thai restaurant on King Street in Hammersmith. Some places on the internet seem to think this place is called Noodles & Magic, but they would be wrong.

bob went on a Tuesday lunchtime in September 2008 at about 1:30pm. There were several customers already. The restaurant can probably seat 30 people.

I had the two course special lunch for £6 and a jasmine tea (£1.50). The set lunch is available noon-5pm. You get a choice between six starters and 14 mains. The food comes as it's prepared so you will get both at the same time. I had the Tom Yum Gai as a starter, which was tasty and spicy. My main was an okay pork Phad Krapow, with plenty of meat and vegetables.

Accessibility: Step-free to get in and to get to the toilets.