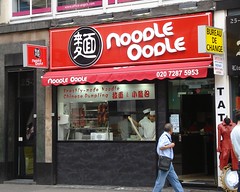 Noodle Oodle was a small Chinese restaurant on Oxford Street, just a few doors along from Tottenham Court Road Station. It closed in September 2011, though their Queensway branch remains open, and as of July 2012 bellaphon reports that they've opened another Oxford Street branch at number 50, where Rasa Sayang Express used to be.

The information below is retained for people who want to know what this branch used to be like.

Small Chinese restaurant on Oxford Street, just a few doors along from Tottenham Court Road Station. Previously known as Inn Noodle, they renamed themselved to Noodle Oodle in mid-2009. They have another branch on Queensway in Bayswater.

This is not the place to take a large group; it probably seats around 30 people in all, and all the tables are for either two or four people, though they seem happy to push two of each together to form a six.

They pride themselves on their hand-made noodles; the noodle-making chef works on a counter at the front window, so you can spectate from the street. They also do quite decent dim sum, including xiao long bao (Shanghai soup dumplings) which actually have soup in them.

Kake, Ewan, Ruudboy, Sarah, and Lex visited on a Friday lunchtime in December 2007, arriving shortly after 12:30; we were seated fairly quickly despite there being five of us. We ended up paying £12 apiece for a very decent quantity of food.

The xiao long bao weren't bad at all, though one or two of the, um, 16 we ordered (four baskets of four) were perhaps slightly lacking in soup. The fried onion dough was very good; a tasty flat round of dough stuffed with spring onions and sliced into wedges, not greasy at all. Crispy pork belly was also good. The carrot flaked pastry was unaccountably devoid of carrot, and a bit bland. Beancurd skin roll was stuffed with carrots and some very tasty mushrooms (it was the crisp kind rather than the soaked-in-sauce kind). The siu mai (open-topped dumpling) that Kake tried seemed a bit dried out on one side; it had perhaps been sitting around slightly too long before being cooked.

Tea (£1/person) was refilled promptly. Service was brisk but not unfriendly. (They accidentally took away a steamer basket which still had a dumpling in, but the dumpling was hiding underneath a doily.)