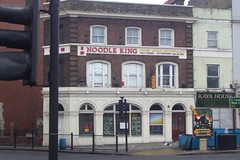 Noodle King was a cheap and cheerful Chinese buffet and restaurant in Deptford, just by Deptford Bridge Station; it has now closed. As of April 2015 the premises are occupied by Xi'An Restaurant, SE8 4PQ.

A cheap and cheerful Chinese buffet and restaurant in Deptford, just by Deptford Bridge Station.

From the outside it appears as if this is a strictly buffet affair, but this isn't actually the case. You can order off a set menu or opt for the all-you-can-eat buffet, which is priced between £6 and £8.50 depending on the day and the time photo of buffet prices and rules. However, vegetarians should note that at least in March 2008 the only vegetarian dishes on the buffet were chips, seaweed, salt & pepper tofu, and rice; so best to stick to the set menu.

Bec, Ewan, and Sean tried the set menu in March 2008. Bec had the vegetables in soup with noodles - substituting mushrooms for beancurd - for £3.80 and it was very tasty with crunchy vegetables and lots of ramen in a massive bowl. Ewan had the veggie spring rolls for starters, which he found a bit bland, and then the vegetable ho-fun noodles, which were piled high on the plate and were perfectly tasty. Meat-eating Sean remarked that his pork dumplings and crispy duck stir fry were acceptable, though he was served two flat colas. Something wrong with the soda-stream?

Bob visited on a Saturday afternoon in August 2008, and went for the buffet option (£6.50 on this occasion). The food was plentiful, and tasty enough, and the Chinese tea was acceptable. There were several other customers present.

All in all, far from gourmet but super-cheap and accessible.