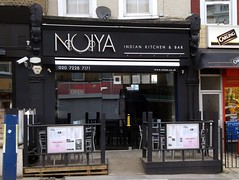 Decent Indian restaurant on Lavender Hill in Battersea. They also do takeaway and delivery, and offer online delivery via their website.

bob, elvum, and Ilmari visited late on a Friday evening (about 10pm) in December 2008. The restaurant was pretty empty. The interior is quite modern and there was popular music playing in the background. The staff were quite keen and three of them asked if we wanted any drinks to start. We were given complimentary poppadoms and dips.

Since we were quite late we skipped starters. bob did however have some really good meat samosas with his main. The food took a while to turn up, despite the lack of other diners, but was really excellent — all freshly cooked, according to a waiter. bob had a lamb rogan josh which was very tasty. The bhindi bhaji was made with small bits of okra and wasn't slimy at all. The peshwari naan was really good as well. elvum ordered the hydra lamb as well as palak ka paneer (made with goat's-milk paneer) for us to share — both were tasty, with complex flavours and well-judged spicing. Ilmari had the Rajstani Matchli: a whole rainbow trout, cooked to perfection, with a good flavoursome sauce.

The total bill was £51 including drinks.

Accessibility: Ramp up to a terrace with tables. A small step down into the restaurant. The toilets are up a couple of stairs and are quite tight for space.