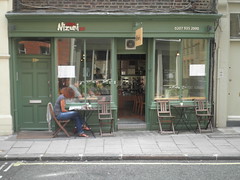 Nizuni Go was a smaller sibling of the main Nizuni restaurant in Fitzrovia, quietly tucked away on Marylebone Lane. According to Google Street View, it closed down some time between July 2014 and July 2015.

A smaller sibling of the main Nizuni restaurant in Fitzrovia, quietly tucked away on Marylebone Lane.

Inside it's very cosy, with just five small tables and three stools by the window counter. On Kat's November 2012 visit, it was about half full at 2pm on a Thursday. The kitchen behind the counter is in full view, if you are curious about where your sushi is coming from.

I ordered takeaway from the counter, but there is also table service. My large carton of beef yakisoba noodles (£6.80) arrived in about 5 minutes, and was pleasantly fatty and filling, with plenty of ginger. Chopsticks were included but no other cutlery. Although the nearby Japanese Canteen is generally cheaper, they don't serve soba noodles, so I was very glad to find an alternative to the rather noisy and busy Marylebone Wagamama for my soba fix [NB the Marylebone branch of Japanese Canteen is closed as of October 2013].

Website warning: not only does the (Flash-only) website play music when opened, it doesn't appear to mention the Marylebone branch at all!

Kat's verdict: I will definitely return and try the sushi.

Accessibility: a small ramp at the front door to get in.