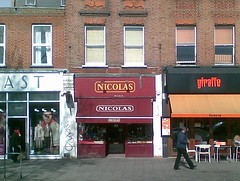 A commenter known as Richard J tells us that it closed in September 2010. As of early 2012, the premises were occupied by a branch of the Gelato Mio ice cream parlour chain photo, but by July 2013 this had closed in its turn and the frontage of the premises (along with neighbouring Giraffe) had been stripped photo in preparation to open as a branch of Bill's.