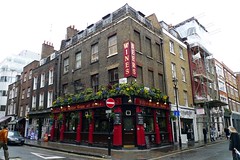 Given the options for drinking in Soho, the Nellie Dean is a perfectly pleasant place without any pretensions, though it still gets crowded on a weekday evening.

Its location does mean it gets fairly crowded in the evening but perhaps not as much as some other drinking establishments in this area, and the downstairs is quite cramped. You can't take glasses outside, so need to request plastic cups if drinking on the street.

According to the Pubs Galore comments linked below, they do food now (as of October 2012).

Importantly (and rarely) for this area, it also has a pool table upstairs (£1) where the local rules seemed to be winner-stays-on. Also, pool is advertised as free on Monday (evenings only?) and there's a jukebox where there were lots of cheesy 80s and Now compilations.